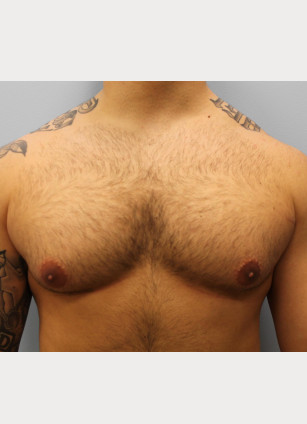 This man in his late twenties came to discuss gynecomastia surgery with Dr. Howell as he felt his chest had excess chest/breast tissue. He decided to go with ultrasonic liposuction and has been extremely happy with his results. He is pictured before and one year after surgery. This woman in her mid-sixties wished to reduce the excess skin on her abdomen. She exercises regularly and has maintained her significant weight loss for the past several years. She and Dr. Howell discussed her body contouring options and she chose to have an abdominoplasty and liposuction of the flanks. After healing well, she continues […] This woman in her mid-fifties was concerned about the appearance of her abdomen, breasts, inner thighs, and upper arms. She previously had gastric surgery and wanted to resolve the excess skin. As for breasts, she was happy with the fullness but mainly desired a lift. After consulting with Dr. Howell, she chose to have a […] This man in his late forties with a history of gastric bypass surgery currently lives an active lifestyle and was interested in body contouring for the excess skin of his abdomen. He met with Dr. Howell and decided to go for an abdominoplasty and liposuction of the flanks. He has good muscle tone and has […] This woman in her late forties wanted to improve her thighs, buttocks and abdominal contours where she has some scar tethering from a past C-section. She and Dr. Howell discussed her various options and she decided on a circumferential body lift and limited SmartLipo of the upper medial thighs and has been happy with her […] This woman in her mid-thirties wanted to enhance the appearance of her abdomen, flanks, and buttocks, but did not want to proceed with a tummy tuck currently. She and Dr. Howell discussed her options, and she chose to have liposuction of the abdomen and flanks with BBL (fat) injections to the buttocks. She has been […] This woman in her mid-thirties was interested in body contouring and discussed her concerns with Dr. Howell. Together, they decided an abdominoplasty, liposuction of the flanks, and BBL fat injections to her buttocks would best suit her desired appearance. Over 8 pounds was removed from her abdomen. She has healed wonderfully with a really nice […] This man in his late 20’s wished to correct his gynecomastia and met with Dr. Howell to discuss his options. He chose to proceed with SmartLipo and liposuction and has been extremely happy with his results. After healing very well with good symmetry he is pictured above before and two months post-op. This woman in her mid-thirties came to discuss body contouring options with Dr. Howell. Her areas of desired improvement were her abdomen and flanks. She naturally had some concerns surrounding her umbilical hernia to which Dr. Howell addressed all of her questions. She underwent abdominoplasty and liposuction of the flanks, which was done in conjunction […] This woman in her mid-thirties sought to improve the appearance of her abdomen and flanks through body contouring. She met with Dr.Tucker to discuss her options and she decided to have an abdominoplasty, liposuction of the flanks. She looks great and has been pleased with her results. She is featured before and three months after […]